Aúpa Teatro takes to the space of Bastardo Hostel its show “Amor no es un microteatro”, a romantic drama capable of shaking the conventions about what we call love. The original work has been performed not only in Spain, but also in Portugal and soon in Argentina, where the cast of Aúpa Teatro will finish the process of creating its next show “Mosuo o no Mosuo” which has received the support of the Community of Madrid with the Aid for the Creation and Development of Performing Arts 2018.

Camila loves Emanuel, her husband, but suspects that she is being unfaithful and turns her frustration on Selena, who only understands love in a free way. What he doesn’t suspect is that it’s this woman he’s having an affair with. Selena and Emanuel are forging an intense and chaotic relationship, questioning their perceptions and beliefs about the way they love. “Amor no es un microteatro” is a countercurrent story charged with viscerality, sensuality, nonconformism and contradiction. And you, how do you live love?

“. . . Carolina Touceda, Martina Belloni and Álex Ortín stand out for the honesty of their interpretations and for their naturalness [. . . ] A deep work in their inquiry about love, how we live it, how we feel it and about the different ways of expressing and communicating this emotional journey. . . ”
Saviron Star (With effect blow)

“. . . Carolina Touceda assumes her first dramaturgical work supported by the performers Martina Belloni and Álex Ortín, who solve with solvency the transmission of the characters’ found and unfound feelings. The performance is very well supported by a dynamic structure that makes history flow.”
Ana María Caballero Botica (Culturamas Magazine) 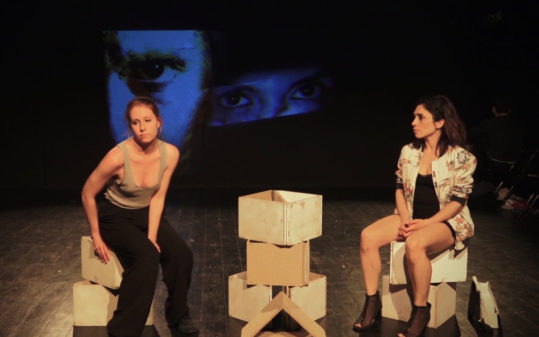 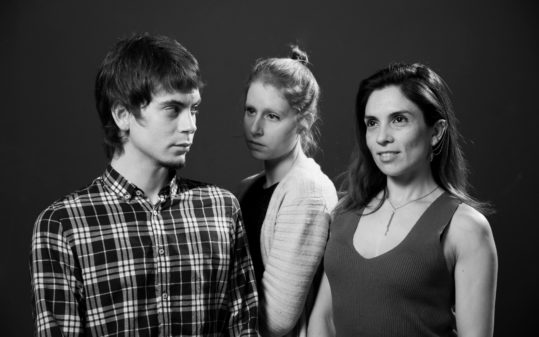 This is how the guys of Aúpa Teatro introduce themselves

Aúpa Teatro has always opted for a different theatre, whose emphasis lies in research and the creation of an innovative language. We unite the experiences and emotions of a contemporary dramaturgy, elaborating a staging in which the theatrical element merges with dance and multimedia language. We deal with social issues, universal themes such as motherhood, fatherhood, emotional dependence and independence, co-responsibility and fidelity. Aúpa Teatro’s shows have received the support of institutions such as the Ministry of Culture, the Community of Madrid, the IberEscena Programme, the AISGE Foundation, Emprendo Danza, C. H. E. L. A. , Graus Town Hall, Pozuelo de Alarcón Town Hall, the Tetuán Cultural Centre and El sitio de mi recreo.

Carolina Touceda is the author and directs this show. She has a degree in drama, dancing, choreography, and circus coach. He has been living in Madrid for sixteen years, where he has been awarded a scholarship by the Menéndez Pelayo International University and the SGAE Foundation. Álex Ortín plays Emanuel in this micro-theater. He is an actor, scriptwriter and graduated in Psychology from the University of Murcia. Martina Belloni plays Camila in the play. She is not only a performer, but also a dancer, choreographer and contemporary teacher. The cast, in addition to their work as interpreters, gives a workshop of scenic creation called “Everything creative through”. They are surrounded by Alejandra Alonso, visual artist of the company, passionate about design, digital arts and art in general. She is also a theatre actress, so she has a special interest in the integration of both disciplines.

You can take a look at his website and here we leave the teaser of his work “Love is not a Story” narrated by Carolina Touceda.

At Bastardo we are always committed to the bolder proposals that go beyond conventionalism, which is why we are especially excited to have this type of project presented in our creative space. You can’t miss this micro-theater that advocates free love, a kind of love from which we all have a lot to learn.

So you know, on Tuesday 5th you have the coolest plan in the most bastard hostel with this romantic drama that looks so good, because in Bastard we only bring you the best. The micro-theater will be divided into two sessions, one at 19:30 h and another later at 20:15 h and while you enjoy the best theater you can take advantage to have a drink in our brewery.

Love is not a microtheatre' social networks